AG: How did you come to write your piece for Hell's Bells?

Oliver Baer: As the second millennium approached, as humans reckon time, my friends decided to start a zine that would showcase our work. Being a group of intellectuals with morbid sensibilities, we knew of HP Lovecraft’s work. We were fans and so when one friend made a comment about another’s sexual proclivities utilizing the great Cthulhu, the idea for the zine was realized.

The first three issues of Cthulhu Sex Magazine:  Blood, Sex and Tentacles featured artwork, prose and poetry from people we knew. As word of our existence grew and more people outside our circles wanted to contribute, we decided to change our look to more that of a magazine. This worked out well enough as we went from having local distribution to national distribution to then adding a small amount of international distribution. We also started publishing anthologies of horror stories under the imprint, Two Backed Books.

Meanwhile, about a year or so before, in another group of friends, a friend wanted to collaborate on a story with me. He was also a Lovecraft fan as well as being the person who introduced me to the master’s work. His idea was to create a story in letters form similar to the way Dracula is written. He wrote the first one and I was to follow suit. I did not do anything until several years later whilst involved with Cthulhu Sex.

When discussing what should be in the new magazine format of Cthulhu Sex, I suggested we have a Letters to the Editor section. My friend liked the idea and we sent out requests. We didn’t get a response. So, I suggested something I learned from reading the Letters to the Editor in comic books. Why don’t we write a couple letters ourselves, maybe get other people in our circle to write some and see if that spurs others to write in. I still had the letter story my other friend wrote and decided to include that in our Letters section as a letter that arrived at the offices of Cthulhu Sex.

The next issue I followed up with a response to his letter that was more about a Lovecraftian incident that arose as a result of the arrival of the letter on my desk. As we continued publishing issues, the Letters to the Editor section saw very little response, so I decided to keep writing my letters as a story. The story was a basic quest to “cure” myself of what ailed me as a result of the incident in the offices. The letters are partly from me, the editor, while on the quest, to the publisher/managing editor of Cthulhu Sex and partly from a translator to the publisher. It does not end well. 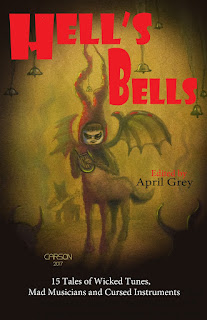 In 2008, the magazine and imprint ceased for financial reasons. I had thought of compiling all the letters into a book format for some time. It would take several years of rewriting the letters into a computer to even get a manuscript of this type together. There were all sorts of distractions, in typical fashion when dealing with the Elder Gods, that prevented the “Letters” book from happening. Two of the distractions being the publication of my poetry book, Baer Soul, in 2011 and the release of my poetry set to music CD, Gathering Souls, in 2012. The CD release party went so well, it became a biannual poetry set to music show called A Conclave of Baer creating yet another distraction. Finally, a suggestion of the “Letters” book reached the ears of someone who decided he wanted to publish it.

In the midst of these negotiations, April Grey, whom I had met at our local Horror Writers Association meeting, mentioned that she was looking for stories to fill an anthology with the theme of music. I told her that while I did not have anything new, music did play a part in the “Letters” story arc. Would she consider one of these? She told me to send her one and she would consider it. So, I did. She accepted it with a suggestion to change it slightly so there was a little bit of a back story and to make the music a stronger element in it. It was now a slightly different piece than it was before so when she asked me to give it a title, which I am usually loathe to do, “Results of an Eldritch Composition” was what we settled on. The “Letters” book will probably see the light of this dimension’s dawn in 2018.


Oliver Baer does many things. He was the editor of Cthulhu Sex Magazine and Two Backed Books. His writings have been included in Cthulhu Sex Magazine, Dream People, Bare Bone #8, Horror Between the Sheets, Horror Writers Association Poetry Showcase Vol. II and Boog City. His book of poetry, Baer Soul came out in 2011. His CD of poetry set to music, which came out in 2013, spawned a biannual poetry set to music show A Conclave of Baer. His true face has been seen periodically at the Lovecraft Bar. He is also visible using the virtual spectrum of social media by following him on Twitter @obaer and/or Facebook https://www.facebook.com/obaer3 Much of his work can be found at Tentacularity https://tentacularity.wordpress.com/
Posted by April Grey at 6:00 AM