Quicksilver Moonlight is Up! 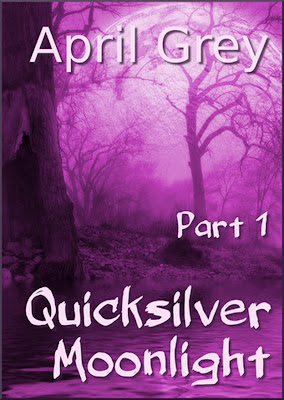 I recently decided to break up one of my novel length stories into different sections and self-publish it. It's an experiment. I want to learn if serializing a story can help sell it in the long run.


Part One is a stand alone, complete in itself, but the story and the characters didn't want to end. And so I wrote more, it got longer and before I knew it I had a novella length tale ready to blossom into a novel.

It's a Regency Paranormal, taking place just after the Napoleonic War and it's my take on historical paranormal and gothic romance. In it ghosts and werewolves haunt the halls of Pembrook Manor.

I haven't written too much in this genre. There's "The Vision" which is also a dark romance, and then my work in progress - A Clockwork King.

Usually my novels are Urban Fantasy, but as of late I've been drawn to the Early Nineteenth Century.

As far as author branding goes, I consider myself a writer of dark fantasy, horror and sf. The key term would be dark meaning contemporary dark fantasy is as valid to me as historical.

Beth felt sorry for her brother-in-law, but that was no excuse for the way he had treated her husband, or the way he was treating her now: forcing her to stay in his house as a nurse to his ailing wife. Once she discovers his secret, she is thrust into a nightmare from which she may never escape.

Accused of murder, Beth Pembrook must rely on the man who stole her inheritance and who plans to marry her off to the highest bidder. Can she trust him?

Ghosts, werewolves and things that go bump in the night abound in this Regency thriller, part one of a planned series.
Show More
Show Less

So it's up and available for reading at both Smashwords and Kindle.  I hope that you stop by.
Posted by April Grey at 8:21 PM