Today is the Day! Trickster Released 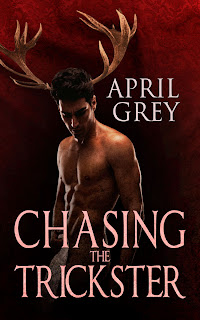 Chasing the Trickster is now available at Eternal Press.

Just released from Eternal Press, Chasing the Trickster is a sexy and witty paranormal romance with a dark underside. Taking place in New York City and Santa Fe, Trickster is a tale of love lost and regained, dashed hopes and redemption.

Excerpt from Chasing the Trickster:
She stalked about then stopped in front of one particular photograph. There was a problem with it, but with today being the deadline she hadn’t had the time to risk airbrushing the imperfection out. Some sort of flaw in the film stock or her supplies had created a ghostlike image in the sky of her desert landscape. She pouted in annoyance.
The quality of light was unusual in this one: a combination of a storm blowing in and the setting sun gave the landscape a surreal translucent glow. There was a interesting spray of cactus in the foreground, which drew the eye and balanced the gathering clouds in the sky.
She looked at it again and silently swore. The pin light on it now needed to be repositioned where a moment ago it was just fine. She found a ladder in the hallway supply closet and headed up, balancing precariously on the top step. Refocusing the light on her photo, she noticed something. From where she was, the imperfection had changed into the image of a vehicle and it was on fire. She could see the superheated air wavering up off of the flames. There was a crackling sound of a blaze and she lifted a hand to guard her face against the heat she felt. It was going to explode. She was quite sure of it. Then she was falling backwards.
Posted by April Grey at 3:31 PM